Women who found a way – creating a women’s language

In ancient China, women were excluded from any standard education. Women did not need to know how to read and write since their main function in society was to be virtuous wives and caring mothers. It was even considered better if a woman did not know much, as she would not be able to challenge any man, especially her husband. Therefore, there was never any formal education for women until the late Qing Dynasty (1644-1912) and only those parents who were rich enough to “waste” money on the education of their daughters would hire private tutors for their girls.

Even though poor women were deprived of the right to receive any standard education, some still found a way. They created their own language—nushu; as of now, it is the only written language developed by women that has been discovered in the world.

In ancient China, women were excluded from any standard education. Education of a man was a very good investment that would be rewarded if one day this man became a government official and was able to bring glory to his ancestors. But the education of a woman was considered to be the most extravagant luxury. Women did not need to know how to read and write since their main function in society was to be virtuous wives and caring mothers. It was even considered better if a woman did not know much, as she would not be able to challenge any man, especially her husband. Therefore, there was never any formal education for women until the late Qing Dynasty (1644-1912) and only those parents who were rich enough to “waste” money on the education of their daughters would hire private tutors for their girls. They did this because the inculcation of basic literary knowledge and the proper mannerisms of “how to be a lady” would make their girls better brides in the future. As for those women from poor and working class families, they usually remained illiterate.

Even though poor women were deprived of the right to receive any standard education, some still found a way. They created their own language—nushu; as of now, it is the only written language developed by women that has been discovered in the world.

Nushu means “women’s writing” or “women’s script.” It was a special script invented and circulated only between women for a long period of time in Jiangyong, a small agricultural region located at the southeast of Hunan Prefecture, China. Until it was discovered in 1982 by a Chinese teacher from the South-Central China Institute for Nationalities, Gong Zhebing, this script was used secretly by local women and no man ever learned it. Gong went to Jiangyong to investigate customs and culture of the locals, but while there he unexpectedly discovered this strange calligraphy that was based on Chinese, but at the same time almost totally different from it.

No one knows exactly when this women’s script was invented. The number of nushu characters has not been confirmed until recently. The Central-South University for Nationalities claimed that nushu is a written language that contains around 2,000 characters with “no spoken counterparts”. These women created an alternative written language because they were not allowed to learn Chinese. Instead of remaining totally illiterate, they created their own language, a secret code between women that men were not allowed to learn.

Jiangyong County has always been blessed with rich and fertile soil that promises its residents abundant harvest. Only men worked in the field. Bound-feet village women were not permitted to work outdoors. They spent the whole day doing housework in their inner chambers.

Within these women’s chambers when men were out, women loved to gather together with other female relatives, friends or neighbors. This was their female world; their own time, their own space, and their own limited freedom enclosed by the four walls of their houses. They made shoes, they cooked, and they did spinning, sewing and embroidery together.

When they worked, they loved to sing folk songs or recite simple poems. A strong companionship developed between them. They would then made pledges in front of god and swear that until the end of their lives, they would treat their female companions as well as or even better than real sisters. Together they would share both fortune and misfortune. This tradition was called “sworn sisters”, which meant women bound not by blood, but by vows. The practice of sworn sisters played a very important role in the invention and dissemination of nushu. In fact, a lot of nushu materials produced were letters to sworn sisters.

You can almost imagine what it was like when these women gathered together to work. They soon found that they needed to express something in words, such as their own thoughts, desires, happiness, sorrows and hopes, all written in their letters to each other, the simple stories and songs they created. So, as Professor Orie Endo of Japan Bunkyo University suggested, nushu was born and then passed on through generations within these women’s chambers. There was no scholar in the establishment of this new script. There was no real teacher or school to pass it on through generations either. It was created by some village women who were poor and not very literate. 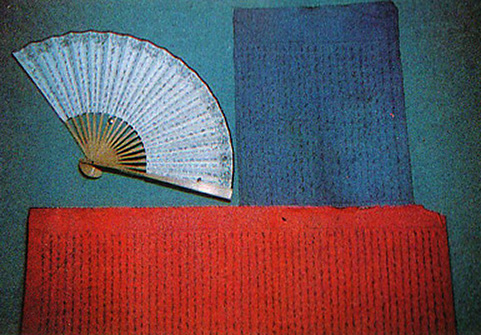 The transmission of the script was rather primitive, as well. For ages, grandmothers educated granddaughters and mothers taught daughters, usually orally. Some girls learned it from friends or relatives. Women who were very skilled at nushu could even make a living by teaching other girls the script. Once girls learned the nushu script, they could utilize the language to communicate with their companions. They wrote letters to each other and made their vows in nushu during the practice of sworn sisters. They composed verses and songs. They wrote nushu in their prayers and chants to god. They wrote nushu on fans and they would even embroider their work on handkerchiefs, cloths and quilts. There were also competitions of nushu writings between women during festival events and the winner would be given great respect. A woman with the knowledge of nushu was said to enjoy a higher status in the society. And when a woman died, her nushu works would be buried with her in the belief that she could bring her works to her next life through reincarnation.

The most crucial distinction is that Chinese is ideogram, but nushu is, on the contrary, a phonogram that represents local dialect. To be more precise, it is basically a phonogram mixed with some ideograms. As for the shape of characters, Chinese is boxier, like a square, but nushu is rather wispy and cursive; it is written in a more elegant way. Apart from all these differences, nushu is written from top to bottom and from right to left, the same as Chinese. 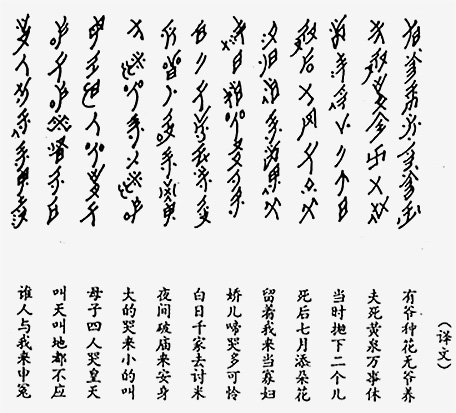 The practice of burying nushu works with their authors might sound interesting to people just learning about the language, but because of this practice, as well as a lot of loss during the dissemination, the remains of nushu materials available now are rare, which has made the studies of the script much more difficult.

When we look into these remains we also look into the lives or even hearts of these village women. As nushu was written in women’s chambers, the writings reflect what has been inside these chambers as well; in other words, the whole world of village women in the past. Most of the collections we have now were letters written to sworn sisters, simple songs and stories, Sanchaoshu and Jiejiaoshu.

Sanchaoshu is a cloth booklet full of nushu songs and poems written by mothers or sworn sisters to a newly married woman. Jiejiaoshu is not a booklet for marriage; instead it is comprised of the commitments made by sworn sisters. They swore in front of god and recorded their pledges in red paper. It is a book of vows.

It is extremely fascinating that nushu could ever be created. Since the power of the patriarchal Confucian culture was so overwhelming for thousands of years, its beliefs became rooted in the consciousness of the people. Even some nushu writers could not rid themselves of its influence. Various nushu works do include patriarchal values, such as how a decent woman should behave and what she should not do in order to remain virtuous. It is inevitable that those values are found in nushu because once you are born, you are brainwashed by the whole environment and social norms surrounding you. It all becomes a part of you so that you will think and act according to certain patterns subconsciously.

But still, when facing the patriarchal culture and its orthodox language, women created something by and for themselves. They were expressing themselves by their own female script, not by the masculine Chinese characters that were made by and tailored perfectly to the needs of men. With nushu, we touch the independent souls and the inner strength of women, women who were not considered to think and feel as a human in old China. We can feel their tears and joy, hope and despair.

We can even find a lot of complaints against the unfair male-governed social system. There is an outcry of feminism in their nushu works. In writing to other women, they could express their resentment and bitterness against oppression when they were so unable to fight for their own rights and respect. The content of nushu even extended to the outside world of politics, as long as it affected their households. We can find some anti-Japanese songs written in nushu during the 2nd World War when Japan launched their invasion of China.

Sadly, as important as nushu was to Jiangyong women, it soon lost its value when the liberation of women began in the early 20th century. The roles for women began to improve. Schools were built for both boys and girls. Women were then allowed to be formally educated and learn Chinese. Fewer women learned nushu after this formal education began. Even more disastrous, nushu was listed as an evil feudal leftover during the Cultural Revolution (1966-1976) and a lot of materials were destroyed. Women who had nushu knowledge were seized and condemned.

After this nightmare, a lot of old women died. Those who survived the ordeal were too afraid to mention nushu again. Until now, according to Professor Endo, there are only 3 women left in the region who still know this script. They are Yang Huanyi (95), He Yanxin (62), and He Jinhua (62). What if all these old heiresses of the script die one day? The younger generation is not eager to learn this script since there is no use for it, except for scholarly purposes. Nushu has become a dead language. The rescue made by the local government has been tepid for 20 years until recently the Hunan Province government announced a new plan to preserve this cultural legacy. If it works, maybe this precious script will be maintained. It is sad to learn that nushu, the one and only female script ever found in the world, may become extinct because of our ignorance.

– Originally published in Off Our Backs Magazine, US, Nov – Dec 2003